I got smart on my way up the Baja peninsula and took my time to see some neat spots.  My first stop was Loreto, BCS — home of the first mission of the Californias.  I rented a little room above a hardware store for the night and enjoyed a hot shower.  The next morning, I took a walk around this picturesque town, and enjoyed an eggs with cactus breakfast while watching the tourists and locals.

On my way down the coast, I had put a few x’s on my map where I wanted to camp on the way north, and when I reached the turn that brought me to Bahía Concepción I looked over that gorgeous bay with a lustful eye.  At about kilometer marker 94.5 there is a sliver of a beach called Playa Requesón.  I rolled down the dirt road to the beach to have some lunch if nothing else, but lo and behold someone was on the beach with a kite!  It turned out Kristine and Kevin, fellow kiters/hobos, had stopped here on their way North from La Ventana.  I quickly decided to camp for the night and set up my gear for a session on some of the most gorgeous water the Sea of Cortez has to offer.  Being out on the water by myself with no other vessel around for miles felt pretty neat, but also made me ride pretty conservatively.  Kevin was my only backup, if something were to go wrong.

Here’s just a few more photos of kiting and arroyo life.  While kiting I got the chance to see some great wildlife up close including a 20-lb tuna, a turtle, a sea lion biting a big trumpet fish in half, and various other birds and such.  The kite is pretty low-impact so you don’t generally spook wildlife.  It occurred to me it might be  a neat way to go spearfishing (for advanced kiters only).

This kite felt huge after riding 9m and 12 m varieties

When a multi-day lull threatened our kite fun, the arroyo council met, and we decided we should go for a road trip.  I really wanted to snorkel Cabo Pulmo — a marine sanctuary with live coral reefs off the east coast of the cape, and Jess recommended we stop by Todos Santos,a quaint albeit somewhat touristy town on the west coast.  We ended driving a three-day, counterclockwise loop around the cape enjoying beautiful views and gorgeous beaches and taking time to get to know the local wildlife.

I was cruising around town when I happened to read a poster flopping in the wind advertising a Lucha Libra in El Sargento.  This announcement was great cause for excitement for me.  Based on past experiences with Lucha Vavoom in Los Angeles I figured we were in for a party!  Mexican wrestling — small town style.  We started the evening with some pre-fight margaritas and activities on the beach, and then headed on down el estadio de beisbol (baseball — get it?) to see “Murciélago” take on “Steel Dragon” and many others.

We showed up at six sharp looking for food and fight inside the stadium.  The ring was set up roughly on the pitching mound, and surrounded by hundreds of Corona Extra lawn chairs.  The first fight wasn’t made up of a lucha libre battle, but instead what appeared to be a junior club boxing match.  The junior fights continued with real boxing and clean calls by the referee.  It was obvious these kids trained together and their camaraderie predated this event.  The whole thing reminded me of a high school basketball game — the family atmosphere, concession stand and teams traveling in group.  While entertaining, this wasn’t exactly what we had come to see — I took the opportunity to get some bistec ranchero and knock back a few Pacificos — those came in handy after biting into a particularly spicy roasted pepper.

Then came the real show — the likes of “The Fly” and “Vengador Águila” started performing some sweet trash talking and the throwing of bodies commenced.  I think my favorite luchador was “El Hijo de Porky” — a very rotund guy who I envisioned was a truck driver or something by day and actually did very little fighting but talked a lot of shit.  At one point there was a climax consisting of a fight between just about all the fighters among the chairs that really got the Mexican crowd going with jeers and laughter.  I later talked to a lady whose brother runs the La Paz Lucha Libre, and she thought the El Sargento one was ‘cheezzy’ and that in La Paz you could get the real deal.  Either way, I had some great laughs and excellent tacos, bistec, and hot dogs (with mayo and hot sauce…what?).

Well, I didn’t last long at the campground.  The brackish water and questionable hygiene in the bathrooms made the 90 pesos/day fee seem kind of steep ($7) especially when you can buy dinner for half that.  I met some cool people who were living in one of the arroyos (dry river bed) just bordering the camp ground, so I pulled up stakes and joined the gang.

Life in the arroyo is pretty relax with a nice sense of community.  We share a communal kitchen between about seven of us, and also have a crow’s nest palapas hang out to have morning coffee, and see who is getting some sick air on the water in the afternoon.  An additional feature of the swanky arroyo that is now my home is “La Casa de Vapor” — a makeshift steam room, that is a wood-fired contraption of hoses, an old gas tank, some plywood and a tarp.  After a hard day of kiting it feels nice to get nice and steamy with some of your fellow kiters.  Once you let go of your claustrophobic penchant and crawl into the three-foot tall structure you can relax in a beach chair in the blue light of a headlamp and eucalyptus vapors coming from fresh-cut leaves.

The daily rhythm is pretty consistent except for the occasional party or outing.  Get up at sunrise, enjoy coffee and swap “how I cut my foot” stories, make some breakfast, and then just wait for the wind to come up — a good time to do some chores.  Then in the afternoon, we kite until our legs start giving out.  At night we go get some ballenas (one liter bottles of Pacifico) and head on over to Poncho Amigos or Pablo’s for some tasty tacos or papas rellenas.  Pura vida! 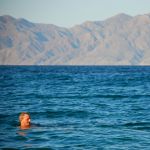 So far I love this place.  It has been honking the last two days, so much so that I had to sit out this afternoon due to my 12 meter kite being too large.  The campground is a nice mix of people who are all here for the same purpose — riding the wind…

Here’s a couple of shots of my camp and kiting:

About an hour into my second leg down the Baja peninsula, I realized I may not make it to La Ventana by nightfall.  As I mentioned before, nighttime driving in Baja is a bad, bad idea, so I settled on the destination of La Paz as another midpoint.  Well rested after a solid ten hours of sleep in my little casita at Gary’s B&B in San Ignacio I picked up the pace a little.  Driving the windy roads in the mountains is a lot of fun, but I was taking the passing of trucks very seriously, as almost every sharp turn has at least one little cross and some flowers, and several times I noticed burnt out car wrecks in the bottom of ravines.  Armed with some empanadas de datiles (dates) I drove nonstop for most of the day save the occasional vista stop and mark on the map for camp spots on the way home.

Why the hurry you ask?  Because the wind is killer in La Ventana right now, and the season is ending at the end of the month.  I figured I can get some exploration in later on in my trip if the wind dies in LV.

By about 5 pm I reached La Paz — the biggest city I had seen since Ensenada — they even have a Sam’s club, and a Home Depot!  Because there was an hour of daylight left, I pushed on to La Ventana.  The last stretch of road turned out to be the most perilous.  The 286 highway is riddled with serious potholes — the type that will remove your wheels from your vehicle — so the going was slow, but I made it safe and sound.